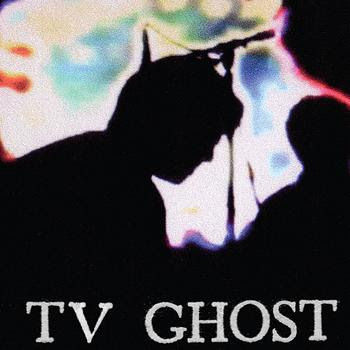 Rarely do bands make me think “what the fuck” in a positive light. Usually when that thought process occurs, my inner monologue says “Why was this made. This was a waste of studio time.” Then I promptly give myself a lobotomy.

Indiana’s TV GHOST first caught my attention when I was walking by the band playing a set at South by Southwest one year. We were inside of Trailer Space Records looking for beer. I only saw about a minute of their set, and it looked like reverb/distortion heavy punk at a glance. I assumed I wouldn’t see them again and moved to the next box social.

I got wind of their newer album Mass Dream (In the Red) A few months ago, and have been transfixed with it since. Its organ laden/wobbly timed/desperate vocals pierce through my speaker butt holes at an alarming rate, then their record is over. Their visuals are enjoyably uneasy in their video for “Subterfuge”. It is rare to see a picture match a song’s feel and this fucking nails it.

transBLENDER: Who am I speaking to, and where are you located?
Tim Gick: I’m Tim and I’m sitting in a cold apartment.

tB: Name 2 records that if someone owns, you can’t help but think less of them.
TG: music is a scam so if anyone actually pays for music they are a doofus. but mostly bullshit bands like ice age//wavves//zola jesus . go see bands live to see how they really suck, and then buy their record.

tB: Explain the wall street protests to a group of 1st graders:
TG: I would probably just make the kid watch “they live”.

tB: The video for “subterfuge” is really strange. What is its deeper message? Be as vague as possible.
TG: it seems this video is about stumbling into a robotrip that you didn’t expect to take, so you clinch your asshole and suck in the impure air as you try to sleep to absurdly loud dreams with people smiling too hard to be healthy to escape the bland and buzzing inferno of wakefulness.

tB: Descending from best to worst, where are the 4 best places in the U.S. to hate your life:
TG: -in a store or restaurant of some kind when your broke
-Reno, Nevada
-outside of a bar when you 3 hours early to a show
-prison

tB: The worst way you’ve heard your band described is:
TG: being limply compared to the birthday party. we started getting comparisons to them before we even heard of them, and they just keep coming. never was really a huge fan either.

tB: Describe your band to a group of old people:
TG: it’s like black sabbath and the doors had a kid who listened to goth music.

Mass Dream is out now on In the Red records.