ADVENTURE – Lesser Known (carpark) – I was suppose to host Adventure with Ear Pwr about two years ago but they didn’t get along and Adventure never made it to Dallas. I actually ran into him on Sunday at the Dan Deacon/Reading Rainbow/Zorch show.

BUTTHOLE SURFERS – Brown Reason to Live 12” (alternative tentacles) – This first came out in 1983. Reissued on vinyl, pressed in a batch of 350 shit-brown vinyl.

JENIFEREVER – Silesia – I got a lot this week, so I don’t have much to say on this except that I wouldn’t mention Jeniferever if it wasn’t worthy to your ears.

The MUMMIES – Never Been Caught (telstar) – Probably my favorite album by The MUMMIES so I finally wanted to get a vinyl copy. This 1992 signature album showcases 17 prominent tracks from the Mummies catalog including “Skinny Minnie”, “Stronger than Dirt”, “Red Cobra #9″ and “She Lied”.

TEAMS vs. STAR SLINGER 12″ (mexican summer) – UK act Star Slinger abruptly canceled his tour to the states with Baths and Braids in February. This is “a collaboration between Star Slinger and Teams”.

TY SEGALL – Live in Aisle Five 12″ (southpaw) – Live album recorded as a trio on July 30th, 2010 at Amnesia Bar in San Francisco. Thirteen tracks including covers of “Don’t Talk to me” originally by GG Allin and the Vibrators’ “Baby Baby”. 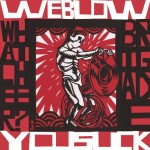