An almost weekly assortment of musical oddities purchased by or given to POF. A fun two weeks of traveling; made stops at Goner in Memphis and a couple shops per my usual in Austin; also Volcom shipped half of this years’ subscription.

The DEAD WEATHER – Hang You From The Heavens 7″ (third man) – First release on Third Man Records. Technically it is a reissue of their Record Store Day 7”, but with a different back sleeve.

The DEAD WEATHER – Treat Me Like Your Mother 7″ (third man)

HARVEY MILK/WILDILDLIFE – Split 7” (volcom) – White vinyl. Third release for the 2009 sub; hand-numbered out of 550, I think it is suppose to be 500 like the rest of the series. Listen to “In the Ground” by Harvey Milk and “Stormbringer” by Wildildlife.

KANDI CODED/VALIS – Split 7” (volcom) – First release for the 2009 subscription. Pink Vinyl. Hand-numbered out of 500. Listen to the tracks on this promotional video on youtube.

QUI – The Little Golden Blanket 7” (infrasonic sound) – White vinyl. Newer band fronted by David Yow of Scratch Acid and Jesus Lizard. Sleeve is signed by all three band members and hand-numbered out of 500.

THOMAS FUNCTION – My Empire 7” (arkam) – Arkam records is an Alabama based record label run by a nice guy, who was in the Wendesdays and currently is in Pine Hill Haints. Purple vinyl and silkscreened sleeve. Thomas Function will be touring September through November, check their myspace for dates.

From GONER RECORDS in Memphis:

EARTHLESS – Sonic Prayer (gravity) – Found for only $2 in the used bin. Two song cd from independent San Diego label. Earthless features Mario Rubalaca from Rocket From the Crypt and Hot Snakes. Here is an mp3 from Gravity Records site, but not off this release. “Lost in the Cold Sun”

LA PESTE (in English “Plague”) – S/T (matador) – Also found in the used section, this time for $7. Worth it for an out-of-print cd from one of the original Boston area punk acts. Death From Above 1979 covered this track on a seven inch. The Wipers may have as well, but not 100%.

From END OF AN EAR in Austin:

From TRAILER SPACE in Austin:

The HOLY MOUNTAIN/COBRA NOIR – Split 7” (no idea) – Marble lavender vinyl. Screenprinted sleeve with lyrics on inside.

The MURDER CITY DEVILS – Christmas Bonus Single 7” (jeff & amy) – Hand-numbered out of 1500. Comes in a stamped cardboard sleeve, housed in a paper bag.

TOTAL ABUSE – Demo 06 7” (even worse) –  Austin HC eight song demo which was originally released as a cassette, comes with insert. 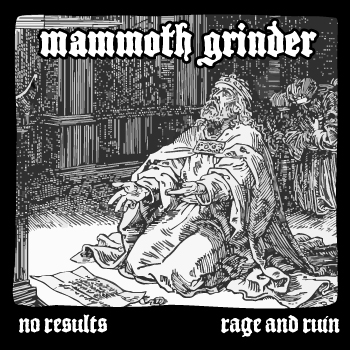 From WATERLOO RECORDS in Austin:

MAMMOTH GRINDER – Rage and Ruin 12” (depleted resource) – Debut lp from Austin metal hardcore band that I have yet to check out yet. Grey marble vinyl. Picture is of the cd version available from Assassinated Records.

OCS (aka ORINOKA CRASH SUITE) – 34 reasons why life goes on without you/18 reasons to love your hater to death (tumult laboratories) – Double disc of John Dwyer tracks recorded from 1995 to 2001. This is the first release for Dwyer under the name OCS.