Batwings/When Dinosaurs Ruled the Earth – Split 7″ (us two) – I finally got my test pressing from Alan. Somehow left it at his house for quite a while. We have records for sale via the us two link at the top of the page.

EL PASO HOT BUTTON – Keep Your EYES Quiet (little mafia) – Final release by Norman, Oklahoma’s one-man blues and noise garage act. Touring with Experimental Dental School in September, which stops at the Lounge on Elm St on the 24th and was picked up as local support to play with Wavves on October 9th (also at the Lounge due to Pastime backing out of All Ages shows).

GIRLS – Hellhole Ratrace 10″ – San Francisco lo-fi dreamy psych duo is made up of Christopher Owens and JR White, but their B-Side, “Solitude”, showcases them as a four piece by adding Drums and electric guitar. Mp3s of “Hellhole Ratrace” and the b-side “Solitude“. Limited pressing, hand numbered out of 500.

The INTELLIGENCE – Fake Surfers (in the red) – I have this on vinyl already, so I will give this away in an upcoming newsletter; email paradeof@paradeofflesh.com to join mailing list. The Intelligence are playing at the Handsome Kitten on October 3rd.

MASERATI – Passages (temporary residence ltd) – Eight organic and fluid “psych-dance-rock’ tracks, intentionally expansive, upbeat and toggling between synthpop and electro. Passages is a collection of previously released Maserati tracks, such as “Join Us, Mystic Sister” & “No More Sages” from the Zombi/Maserati Split 12″ and Thee Loving Hand’s version of “Inventions” from the Inventions Remixes 12″;  remixes by Steve Moore of Zombi and Justin Van Der Volgen (formerly of Out Hud and !!!) included as well. Touring with Mono in October, making a stop in Dentron on October 16th.

PVC STREET GANG – S/T (self) – Debut five song Ep by Dentron duo, that became a trio and is planning on being a duo again this fall. Recorded at Klearlight Studios in Dallas. Playing Sept 26th at the Boiler Room and with the Intelligence on October 3rd at the Handsome Kitten.

SIC ALPS – A Long Way Around to A Shortcut dbl 12″ (drag city) – Double vinyl collection of out-of-print Sic Alps releases compiled from a cdr, one cassette, two 12″s and various 7″s from 2006 to 2008. Includes the complete album Description of the Harbor. Full color inner sleeves with lyrics. Includes a Throbbing Gristle cover of “United”. Good for those who dig the current San Francisco garage pop scene that’s been emerging over the past few years (ex. Thee Oh Sees and Ty Segall). 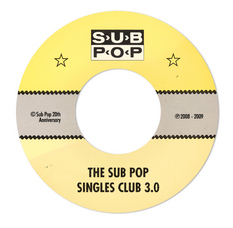 Sub Pop Singles Club 3.0 – I didn’t subscribe to this, but  managed to snag these from this year’s re-inception:

Note: Each vinyl release from the Sub Pop Singles Club is limited to 1500 copies and comes with digital download.

TORO Y MOI – Let Alone At Night 12″ (savant guard) – Remixes by Drop the Lime, Pink Skull and Dave Allison. Look for him to release two polar opposite albums in 2010.

KURT VILE & The VIOLATORS – God Is Saying This To You… 12″ (mexican summer) – Reissue limited to 500 copies on translucent marble red vinyl available at select shops or on tour. Kurt Vile & The Violators will be making a stop in Dallas on Halloween.